THE SEARCH FOR LIFE IN THE STRATOSPHERE, INSPIRING THE MINDS OF YOUNG SCIENTISTS!!

On the night of Friday the 10th of November, the Firth court quad in the University of Sheffield became the stage to a spectacular event. Inspiring educational videos that school students created were projected on the walls of the Firth court building during an outdoor screening that lasted all evening.

As part of the Krebs festival for this year, a selected few Post-Graduate researchers participated with seven local schools to produce short animated films about the research each of them is doing in his lab, topics were explained in general terms that the public can relate to. Our research on the theory that life is coming from outer space to Earth continuously (Panspermia), was something that fired the imagination of the school children. Working with Sheffield’s local artist, Steve Pool, short videos were produced for each of the topics, ours included. 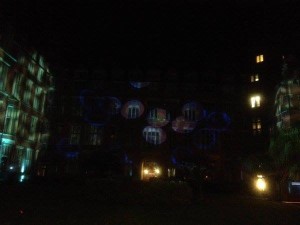 The whole project lasted for about a year.  Starting with planning, visiting the schools multiple times, and providing advice on the production of the video, with the final product being projected during the outdoor screening on the day of the Krebs School’s project. To see all the videos, including the one relating to the Search for microbes in the stratosphere, this link can be used.